Discussions which are Out of Character.
Post Reply
398 posts

At the morning of 418.19 Donan can be seen moving his stuff to dorm room F. 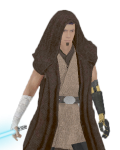 For those who are familiar with Nicole's lightsaber hilts, it may be noticed that Nil is now carrying one of them on his belt.
Species: Human
Homeworld: Chalacta
Initiated: 407.15 ABY
Apprenticed: 419.12 ABY
Mentor: Nicole Vantane
Top

Donan can be openly seen increasing the intensity of his work outs and doing stunts that he was not seen doing before, such as 90 degree push ups, one handed push ups, climbing on the rock side that is in our Praxeum yard. 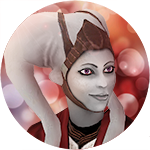 Four prisoners are being held in the Security wing. Brought in by Padawan ayyagella, and Zyli Hiden. On the left cell is a woman And man, human. On the right is A trandoshan, Blue mon Calamri. along with a new ship in the hanger, a Refurbished YT-1300S.

::While you watch one of the Holoscreens in the Praxeum's cantina, the broadcast is interrupted as per usual with a string of advertisements. One of which is essentially propaganda.

The clip shows several different types of beings receiving boxes from friendly delivery-persons adorned in purple and white uniforms. Each recipient, in turn, either looks straight into the Holocam to recite the phrase "I stand with Standiartha," or moves to a window to wave 'longingly' at a four-winged shuttle as it flies off into the distance. At one point, notably, it shows an old human man who says, instead, "I'm standing because of Standiartha", and the Holocam zooms out enough to show his prosthetic legs which sport the company's logos on the side of the metallic thighs.

A shuttle rises up behind him and departs into a beautiful swirl of clouds that slowly embody the company's logo above a slogan,::

Standiartha
Wherever you are, we Stand with you.

::It then fades to black and your selected channel resumes it's regularly scheduled programming.::

Grruvahk appears to have bandages underneath his clothing on his right shoulder for the next few weeks.

Upon his return, Donan would seem to those that have seen him on the evening of 422.15 ABY have plenty of burns on his robes. Some would indicate blaster fire and other would look like lightsaber cuts. In the trash bin of the Student quarters his black robe would be thrown out.