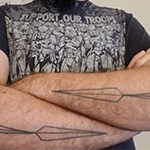 Early in April of this year, Master Raun took some time out of his busy schedule and sat down with me to answer some questions about who he is, what he does, and what he plans to do in the future.

Interview wrote: Soh Raun is the creator of RPMod, the mechanics that make role-playing like this possible, as well as the co-leader of JEDI. He has spent the last three years working on a modification to Jedi Academy that makes it more conducive to a role-playing environment, and took some time this evening to talk to me about it.

Sared First off, tell us a little bit about yourself!

Soh I live in France, and I'm a 21 year-old student in computer science.

Sared When did you first see a star wars movie?

Soh I don't remember exactly, but when I was a child.. and before the new trilogy (ep1/2/3)

Sared Do you remember your reaction?

Soh Hmm it was a long time ago, I don't remember really, but I liked the movies.

Sared At what point did the SW universe truly leave a mark on you? (I know when I was a kid and I saw the movies for the first time, Darth Vader scared me half to death!)

Soh I think it was only after I started playing Star Wars games, starting with JK2. It gave me a broader view of the universe, and I kept discovering new things.. that's when I really started to love it. Before that, I simply enjoyed it like any other movie.

Sared Do you play base JA much? And which gametype do you enjoy the most?

Soh Hmm not really, I use RPMod- but otherwise I like team games like CTF or Siege.

Sared Are you playing any other games right now?

Soh I suppose a random game of Spider Solitaire or Mahjongg doesn't count? I mostly play "small" games these days, if you don't count Jedi Academy. I also played KOTOR and KOTOR2, which I particularly enjoyed for their level of immersion, but also BattleFront 1 and 2

Sared What got you involved in online gaming communities?

Soh Well, for real gaming communities (not an occasional online game with friends), I started with JEDI thanks to my friend "Phoe Nhix". He was already there, and he incited me to come and see how it was - and I liked it.

Sared What got you interested in making your own modification to the game?

Soh I already knew how to program in several languages, and one day I decided to take a deeper look at the JKA MP code. I had no real intention at the time, I was simply curious to see how things work. That was during summer 2006 I believe, so I had a lot of time to discover it, and I started making my own modifications to improve a few things here and there. And as I was in JEDI, a role playing clan, I thought it would be nice to customize JKA for that purpose.

Sared What can you tell us about RPMod? What kind of design goals did you set for it?

Soh I think I first talked of this potential project to Axem Keigoku, one of the founders of JEDI, who had already many ideas for such a mod but lacked the technical skills to do it. The general concept is that RPMod is meant to be a tool enabling role-playing the way you want it to be. It's very configurable and isn't meant to push any kind of clan model onto its users. That being said, its development has seen several "steps". At the beginning it was just a small mod for my clan to improve things a bit and give a more RP feeling to JKA Then came the Accounts system, which introduced logins, XP, Classes and Levels. This changed the habits in the clan, as Mentors could now give XP in game instead of having to keep track of points manually on the forum - and Force powers available to a student became loosely limited by their class. Another change in goals occurred when the Accounts system was coupled with an online Web Service, to make this Accounts system available from a simple browser and synchronize accounts across JEDI servers.

Soh Yes. If anyone is interested, it's a SOAP Web Service made in PHP and using a MySQL database. Although since the beginning many small and bigger RP features were added to JKA, the Accounts system became really the heart of RPMod and the most complicated component of it. As for future goals, on which I'm working nowadays as my university project, the main goal is to rework the Accounts system to open it up to other clans, allow more than one character per person, etc. For the moment, RPMod is still in a closed beta, but this is in preparation of a public release.

Sared Speaking of which, RPMod is currently in version 0.4.1, are there any other major changes you see happening before RPMod will be released to the public?

Sared Is this entirely a one man project? Or do you have any other coders assisting you?

Soh For the new Accounts system, I have a friend working with me on it, but I might call for help with graphics, soon. I'm not really an artist.

Sared What can you tell us about JEDI? What are its goals, and how does it set itself apart from other gaming communities?

Soh JEDI is a strict role-playing clan offering a complete Jedi curriculum to its members, in an immersive universe set more than 250 years ABY. This is achieved through the day-to-day RP of a Jedi Temple; including classes, Mentor-Padawan relationships, and occasional missions featuring custom-written storylines. I would say what makes JEDI different is its level of strictness, which may not appeal to everyone, but finds its public. However, we believe in the potential of every newcomer as long as a positive attitude is displayed. After all, I knew nothing of role-playing when I first came to JEDI

Sared How long have you been a part of the JEDI community?

Sared If you could take every newcomer to the the JEDI community aside and tell them just one thing, what would it be?


You can check out the original interview here!